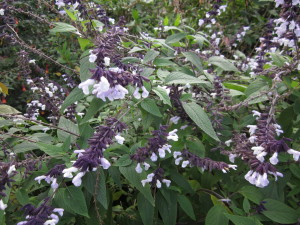 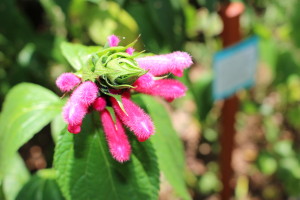 Of all the plants we have which are easy to propagate, easy to grow and freely give such wonderful colour in sun and shade the Salvias stand out. Various Salvias have been grown in Australian gardens from the 19th century but the range of available species and cultivars has expanded greatly in the last few decades.

For Salvias we have referred to “The New book of Salvias” Betty Clebsch, Florilegium 2003 as well as Newsletters of the Salvia Study group, Victoria for detail and expertly researched notes about these plants. We also refer to “Salvias in South East Queensland” by Barbara Wickes 2006 (revised and reissued 2012). In the decade or more since the publications Salvia hybridization and collection has grown. By preference we prefer to look for Salvia species to collect.

“The Shambles” Collection of PERENNIAL SALVIAS 2020

Salvia  chiapensis x leucantha “Majenta Magic” Flowers on long wands carrying deep magenta flowers above a vigorous bush some 80 cm or so tall. It flowers from summer through the autumn into winter in sun or light shade. NE corner of back verandah next to Salvia confertifolia

Salvia corrugata is a perennial shrub native to Columbia, Peru, and Ecuador, growing at 8000-9800 ft elevation. It was brought into horticulture about 2000 as a result of a collecting trip to South America in 1988. All the plants in cultivation today are from six seeds that germinated from that trip. Central Shrub Garden. NE Corner Verandah

Salvia dorisiana This is a late winter-early spring flowering shrub which grows up to 2m tall. It has large velvety leaves which have a delicious scent of fruit salad, and spires of quite large hot-pink flowers. It can cope with a degree of shade. Fenced Rose garden, Raised rock garden

Salvia elegans syn.S.rutilans. (Pineapple Sage) The Pineapple scented foliage is quite attractive. Small red flowers are bee attracting. North of house, near cloths line and rock circle garden. There is a close variant of this Salvia with more camphorated scent under the cloths line. Mexico North Rose garden, Back Verandah, Fenced Rose garden

Salvia iodantha x longistylus Tall Salvia with flowers similar in luster to S.Iodantha but more mauve to pink in colour and less tightly packed then the S.Iodantha Criss Cross garden. Persisting but damaged and vulnerable 2017

S. karwinskii  ‘ Redsprite’  strong upright growth form, growing to at least 3m, it has greyish leaves but much redder flowers. The flowering stem isn’t as dense as species form, but produces copious number of these red flowers. Garden Hybrid Mexico. Behind pool embankment

Salvia x leucantha “Meigans Magic” grey tone in foliage. Meigan’s Magic is a chance hybrid discovered in 2005 in the garden of Robyn  and Ian Powell at Mylor, South Australia.  Named after their grand daughter, Meigan, the young seedling was found under Salvia leucantha which is assumed to be one parent, but the other is unknown. White flower in purple calyx. A very successful Salvia in our climate. Front path garden

Salvia madrensis. Very tall salvia with large leaves and square stems. The flowers are on long spikes of bright Yellow. Very tough and easy to care for but large dominating plant.Mexico Gardens east side of the house. East Border garden, Central lawn and Borders

Salvia microphylla ‘Huntington Red’ is an evergreen plant, growing from 70cm to 1 meter and spreading from 60 to 75cm. It has a shrubby growth habit with many thin, but firm and upright stems. The striking dark coloured stems approach black in colour and show off the red flowers. The calyces are almost black North West Corner Stone Circle

Salvia officinalis low growing culinary and medicinal sage Europe to central Asia 1.1875 Only survives in containers for us

Salvia “Omaha Gold” (Variegated Anise-Scented Sage) Rumpled and lance-shaped, the spectacular leaves of this sage are yellowish-lime with splotches of emerald. Rub them and you smell anise, a licorice-like scent. The bountiful, cobalt blue flowers cover the plant from summer Central Shrub garden near S. oxyphora

Salvia x “Phyllis Fancy” White and mauve flowers and purple calyx. Near side stairs in quite a shaded position. East Border garden

Salvia puberula is a medium growing shrub reaching up to 1- 1.5 meter high by a similar width, although it may not reach this size in Australian gardens. It has lime green, heart shaped leaves that may be up to 10 cm long. The leaves and much of the stem and flowers are be covered in fine hairs. The winter flowers are held on top of a floral spike and are usually pink, although the tone may vary. They extend out at various angles looking much likely a large hairy pink spider. Mexico. Pool embankment

Salvia purpurea is a tall evergreen which flowers in winter with jacaranda coloured flowers. It is a tall brittle plant, similar to iodantha in growth and flower but a different flower colour.  The foliage also tends to have a grey tinge. In the mountains near Puerto Vallarta in Mexico iodantha is a very common plant but S.iodantha grows at a different altitude. Ours from cuttings Chris Donlen at Obi. East Border Garden

Salvia splendens, unnamed tall varieties of this perennial Salvia in our garden include a cultivar with mauve and white flowers, one with White flowers and Red flowering with variegated foliage, as well as one with White/Red. Many shrubs persist and can flower throughout the year in sun or shade. Brazil 1.1875, 1A.1885, 7.1897, 10.1855, 12.1962, 13.1900/1.Tall Reliable Salvia in most areas of the Garden

Salvia transsylvanica is a herbaceous perennial native to a wide area from north and central Russia to Romania. It was described and named in 1853 by botanist Philipp Johann Ferdinand Schur, with the specific epithet referring to the Transylvanian Alps located in central Romania From Glennis  Front gate 2020

Salvia wagneriana Tall, winter flowering salvia . This Salvia certainly looks like an involucrata, but it produces  green round stems and has a similar arching habit to approx 3-4mH. There are two flower forms, a normal pink form and a paler version. The flower head is very compact a the end of the stem with many flowers being attached in a bunch. Central America. Pool embankment

Salvia aurea is an aromatic hardy shrub with unusually coloured flowers borne over a long period. It is fairly fast-growing, up to 2 m, and very attractive to wildlife. Flowering begins in early spring, and the bright yellow flowers soon fade to rusty-orange and then reddish brown. After the petals fall, the saucer-like calyx, which becomes papery with age, remains as an added attraction. South Africa  From Glennis

Salvia splendens ‘Ellie’ is a tall upright perennial that grows from 1 to 2 meters high. The ovate, light green leaves are quite large, deeply veined and have a pebble like texture and serrated edges. They look a little like the leaves of old fashioned roses. The flowers are coral pink-red and have a long tubular section and small lip at the end. The bracts are slightly darker, with a brown red tone that seems to deepen as the flowers open. The flower, or corolla, is twice as long as the bracts.

We have placed these perennials with the Salvia list as they complement each other and do similar work in the garden design. They have spike or labiate flowers or flower structure which is reminiscent of the appearance of some of the Salvias.

Aloysia triphylla,( Lemon scented Verbena) This plant has delightful scented foliage and a  loose Salvia like form. These are slow to get going in our conditions, for some reason. Prof. Ortega, of Madrid, sent specimens from South America to Mons. L’Heritier at Paris, where Dr. Sibthorp obtained it, on his return from Greece, and introduced it to Britain in 1784. Probably at Camden Park NSW from 1850. Certainly in Queensland by the later 19th century. Chile- Argentina 1A.1885 (Lippia citriodora?), 6.1897, 7.1897, 9.1851, 10.1855, 13.1900/1,15.Camden Central lawn and Borders, Front Path garden

Brillantasia subulugurica. Large leafed, lax shrub with quite large mauve/Blue flowers reminiscent of but larger than Salvia flowers. First collected in 1818 by Paliscot de Beauvois in Benin along with various other species collected from Africa, the taxonomy of which has been revised over the years by Bentham, Hooker and others. West Africa 15.Camden Blue Trellis gardens, Eastern Border garden

Dicliptera suberecta. Soft sprawling grey foliage plant with tubular orange Salvia like flowers, this plant has spread happily and self seeds in semishaded areas. I thought that this was some sort of salvia initially. Uruguay Stone Circle, East Border gardens

Hypoestes aristata Ribbon Bush is a fast-growing shrub that grows up to 1.5 m high. It produces soft, hairy, dark green oval leaves and has attractive lilac  pink or white  flowers borne in spike-like inflorescences. It flowers from May right through winter till early spring. It is not unlike salvia really as the clouds of small flowers compliment the garden as salvias do and makes up for the tendency to self seed. Easy to strike from cutting, low maintenance South Africa, Eastern Cape in the south to tropical Africa East Border Garden

Hemizygia transvaalensis syn.Syncolostemon (Pink Sage). Perennial from high veld. Easily grown from cutting This species was first collected near Barberton (then Transvaal, now Mpumalanga ) by Ernest Galpin (1858-1941) banker by profession, amateur botanist and plant collector, and was named in 1897 by Rudolf Schlechter (1872-1925), German botanist and traveller. I have found this surprisingly difficult and slow to get going, much prefers moist and semi-shade. South Africa 15.Camden Below Back Verandah.

Justicia betonica (White) This tough, self seeding tall plant has white flowers, with a touch of pink, not unlike Salvia but more upright. I love this invasive Justicia but I think Kyleigh finds its vigour annoying. Tropical East Africa 1.1875, 7.1897 Front Path garden, gatehouse

Phlomis fruticosa – Jerusalem Sage  This is an evergreen perennial with silver foliage. An excellent plant for those dry, sunny areas. The tubular flowers in golden yellow are produced in clusters, around the stem, from top to bottom. Turkey Driveway Garden

Plectranthus ecklonii was first collected in 1813 by William Burchell, however Bentham described the species in 1848 based on a specimen collected by Ecklon and was unaware of the earlier collection. Plectranthus ecklonii has a wide distribution from Somerset east in the Eastern Cape to Barberton in Mpumalanga. It is confined to moist coastal subtropical and Afrotemperate Forest and forest margins. It is common in the under-storey at forest margins or on wooded stream banks. This species is named after Christian Friedrich Ecklon (1795 – 1868), Danish pharmacist, plant collector and traveller in South Africa. John Medley Wood introduced it to the Durban Botanical Gardens towards the end of the nineteenth century. It is thought that Ecklon sent seed of it to Baron Von Ludwig in Cape Town. It was the first plectranthus to be introduced to Kirstenbosch and has been growing there since 1914, shortly after the Garden was established. Tall shrub resembling a tall salvia which produces pannicles of blue, pink or white flowers in summer. Easy to propagate and care for. South Africa   Central Shrub Garden, Fenced Rose garden Eastern Borders

Scutellaria costaricana  (Scarlet skullcap) Tender perennial native to Costa Rica, where it grows in the mountain forests at elevations as high as 2,000 m (6,500 ft). It is grown as a house plant for its orange- red flowers which are borne in rich terminal clusters. It is a member of the mint family. East Border garden