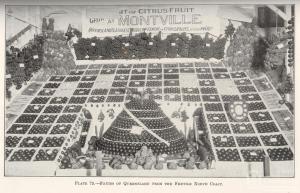 We can demonstrate that James Eli Hallett bought 18acres 34 perches (including the land upon which “The Shambles” stands), from Edward Smith on 15/7/1912. When he was advertising to sell the land 23 years later in 1935 he described it as an “Excellent Montville Orchard” with “200 citrus trees of best varieties in full profit and carrying a heavy crop. 6000 pineapples just cropping” Article: Nambour Chronicle and North Coast Advertiser, 15/3/1935, page 4. 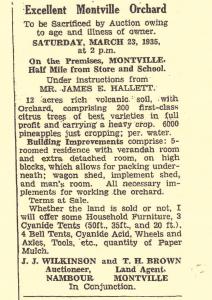 Our home, in its former stae at James Hallets Farm for sale 1935, The Nambour Chronicle

We have deduced that our former farm house was built before or around 1911. The style of the pyramidal roof, simple timber farm house is one used from the 1890s up to the First World War. We noted that James Hallett occupied a dwelling on the site from mid1912 and secondly making improvements to selected land had been a practical necessity for Henry and Edward Smith and early land tax and rating laws favoured development.  Queensland’s early local government legislation required every local authority to make a valuation of the ‘annual value of each parcel of rateable land and to levy its rates on that basis. Moreover, the 1879 Act provided for a separate valuation of ‘buildings and houses’ and allowed for the deduction of one-half of the annual value in respect of those improvements. In 1890 Sir Samuel Griffiths Liberal-Conservative Coalition Government introduced the Valuation and Rating Act (Qld.), a measure which excluded improvements from local authority rating in both urban and rural areas and was the first legislation in Australia to impose rates (as opposed to land tax) on the unimproved capital value of land. A Queensland Royal Commission of 1896 endorsed this concept and prompted a consolidating Act, the Local Authorities Act, 1902 which confirmed the previously established principle of valuing land, excluding improvements, for local rating.  “The Walsh Memorial Bequest Address” delivered at Macquarie University School of Economics 27 May 1988 by MD Herps, FAIV, DipLaw (BAB), FSLE. 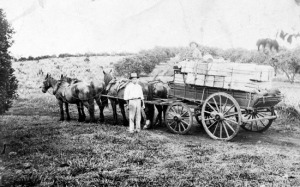 Harry Gunn transporting Fruit, including Pineapples from Montville to Palmwoods 1914

FRUIT TREES, PINEAPPLES in the early 20th century  But which varieties?

Fruit growing on relatively small subdivisions had been the chief industry in the Montville district since the beginning of European settlement. By 1914 A.H. Benson reported, “Mr A., Blackall Range, marketed 7 ¼ cases per tree from a row of twenty five “Beauty of Glen Retreat” Mandarins, planted April 1900. A return of £1 10s per tree. Mr B., from the same district, averaged 7 cases of Washington Navel Oranges per tree from trees six years old, which realised £1 15s. per tree, and 8 cases of “Beauty of Glen Retreat” Mandarins from trees of the same age. The Navels were large, and averaged 5 dozen per case, and Mandarins 10 dozen per case” (1) Benson also states, “Until quite recently, citrus-trees were almost entirely grown from seed in this state, which means that we have a very large number of types, and many crosses between species. This was not advisable, as a uniformity in type is desirable for marketing, hence the greater number of trees now being planted are of selected varieties of proved merit.” (1)  Citrus varieties listed by Benson (1914) are Valencia late Orange, Washington Navel Orange, Mediterranean Sweet Orange, Jaffa Orange, Seville Orange and Emperor Mandarin, “Beauty of Glen Retreat” Mandarin, Scarlet Emperor Mandarin and Tangerine. He also mentions the growing of Lemons (unspecified), Citrons, Kumquat, Pomelo, Tahiti lime and West Indian Lime. (1) By 1958 Harry Oakman also mentioned the availability of Ellendale Mandarin, Villa Franca Lemon, Lisbon Lemon, Eureka Lemon, Genoa Lemon and Meyer Lemons (2). 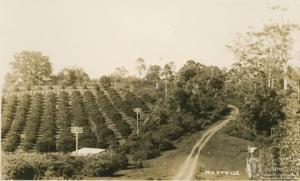 Using L.P. Rosens 1936 “Catalogue of fruit trees for sale” as a guide, the range of budded and grafted Citrus and other fruit trees available was considerable. (8) This is confirmed by the reports of the varieties exhibited by the Montville district fruitgrowers at the Brisbane exhibition (3), (4)

Other Citrus fruit offered in the Rosen Catalogue, 1936 include 9 varieties of Lemon on the above mentioned rootstock and for the same price as Oranges and Mandarins. Varieties include Eureka, Lisbon and Meyer. Their catalogue also offers, Citrons, Cumquats, Limes (3 varieties), Grape Fruits (11 varieties), Sevilles (Bitter Orange) and Tangelos.(8)

Persimmons propagated on Persimmon stock, for 1/9 ach, 21/- per dozen or £5 per hundred were also listed oj the Rosen catalogue 1936, with 18 varieties, including Dia Dia Maru (sic), Kingcot and Okame. Custard Apple or Cherimoya are listed with 3 varieties including “Pinks” for 5/- each. We were interested in these references as both remnant Persimmon and Custard apple were in our garden at “The Shambles” when we arrived.

Anecdotal evidence (Robert Hooper, long term Montville resident) is that one former farmer and resident of “The Shambles” site grew Rhubarb. Mr Doessel would have been obliged to water and fertilize his Rhubarb crop heavily for potentially continuous picking, on the land behind our “Plough Inn” (former Machinery shed).

James Hallet in 1935 reports 6000 Pineapples were being grown at the site of the original farm around “The Shambles”. Once again we have no hard evidence of when Pineapple farming commenced or ceased at this site. Benson in 1914 claimed that with adequate soil preparation Pineapples may be harvested twice a year in rotation. He also stated “With a weight of 2 1/2lbs each a return of 15 tons of Pineapples may be expected”. Oakman in 1958 described the growing of local varieties of ‘rough leafed’ Pineapple such as Ripley Queens, McGregor and Alexandra. He stated that the Smooth leave Cayenne Pineapple is the chief commercial variety, the young plants being grown from suckers, slips or tops. Smooth Leaved Pineapples are the main canning variety. Pineapples were recommended to be planted in October for harvesting after 18 months. (2) Pineapples once harvested were packed and taken by wagon and later truck to the Palmwoods Railway Station for delivery to the Roma Street Station and produce market in Brisbane.         By the 1940s a Cooperative under the management of the Pineapple Sectional Group of the Committee of Direction of Fruit Marketing – COD – and a Trustee for the Subscribers was established to cater to the interests of fruit farmers.  The new “Golden Circle Cannery” was opened at Northgate in Brisbane in 1947 by the then Premier Mr. Ned Hanlon.  The Company was originally called Queensland Tropical Fruit Products and they used the brand name “Golden Circle” reference: www.wamurancommunity.com.au

Fruit growing has been important for the small Montville community since the beginning European settlement. Quoting from the Brisbane Courier from 1928, (District Fruit Exhibits, RNA Brisbane Show), “Montville has long been known as a fine tourist resort, its elevation on the Blackall Range of 1600 feet giving it a bracing climate. This is not only a grateful pleasure for the tourist and residents but has its effect on the quality of fruit produced. The display set out shows the seven varieties of bananas that flourish on the tableland………………….The centre back is a fine selection of citrus fruits, in fact citrus fruits form the chief feature of the exhibit, over 60 varieties being shown. There is also a very good collection of custard apples and papaws (sic). The centre of the display is composed of citrus fruits, which includes four varieties of grape fruit. Mr C.J. Frost, organizer in charge, has the assistance of Messrs. F.L. Millet and J. Aird” (3)                                      From The Queenslander 1934, under a heading “Show fruit Indicates What Orchardists Can Achieve” and “Exhibits from Montville”,  “Montville and district is staging an excellent display of fruits , for which the red soil of the Blackall range is noted. These chiefly comprise all varieties of citrus fruits, pineapples, bananas, custard apples, papaws and strawberries……………in common with fruit growers in other parts of the State those engaged in the industry in the district are battling against low prices, said Mr Swain” (4)

Montville had its own Fruit growers Association and The Nambour Chronicle article of 1930 gives a small insight into their concerns. Under an article “Montville fruit Growers, Years Activities Reviewed”, the annual report stated that there were 23 members and 7 meetings had been held. The report acknowledged a creditable display at the Brisbane Show and that “the district again been successful in winning the citrus shield. The school children had also been successful in winning the John McDonald Shield for packing.” Perennial concerns about the maintenance of local roads connecting Montville to the Palmwoods railway, fruit marketing through the C.O.D (the cooperative Committee of Direction of Fruit Marketing) and threat of diseases from “imported fruit” were reported.(5) 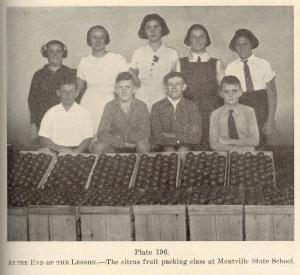 HOW DID THEY DO IT? THE EFFORT and RISKS OF FARMING AT MONTVILLE in the first half of the 20th century.

By 1940 electric power had reached Montville, including along Western Rd. (Western Avenue). Road access to Palmwoods or along the Blackall Range to Maleny or Mapleton was weather dependent and a continual cause for local concern. Since the first days of European settlement intensive farming of all manner of fruits at Montville, on relatively small farms was not without effort, risk or environmental impact. Harry Oakman in 1958 stated that Citrus plants are gross feeders and described the need for ½ pound of sulphate of Ammonia per tree per year of age up to 5 pounds recommended as a Spring dressing along with an 8-10-8 fertilizer in Autumn.  This means 8% by weight Nitrogen, 10% Phosphate (Phosphoric Acid) and 8% Potassium Sulphate. For Pineapples Harry Oakman advised a 10-6-10 (high Nitrogen) fertilizer at the rate of fifty pounds per thousand plants in September, December and March. Along with animal manure and composted material this represents a considerable effort and over time, and a potential risk to soil chemistry. (2)

Citrus crops being subject to a wide range of insect pests and some plant diseases Harry Oakman recommended application of Lead Arsenate dust for leaf eating insects and caterpillars, Nicotine spray for Aphids and application of Lime Sulphur in Winter. Pineapples are apparently subject to various causes of wilt from fungi, nematodes and mealy bug as well as adverse wet weather effects. (2)

In 1976 the ¾ acre of land with the original farm house (which we now call “The Shambles”) was subdivided from the original farm and played no further part in agricultural production. Apart from a residual of ornamental shrubs and a few fruit trees it remained a rental house on a largely open grassed parcel of land until we bought the property in 1992. We have found no evidence of damage from decades of intensive farming.

(6)  ”A Bibliography of Cyanide Compounds used as Insecticides” Bureau of Entomology and Plant Quarantine, United States Department of Agriculture June 1935

(7) “The Biology & Ecology of Pineapple (Ananas comosus var. comosus ) in Australia, The Office of the Gene Technology Regulator, April 2003

(9) Disease in natural ecosystems caused by Phytophtora cinnamomi, Australian Government, The Dept of Environment, Water, Heritage and The Arts. 2008